AHEAD OF THE PACK 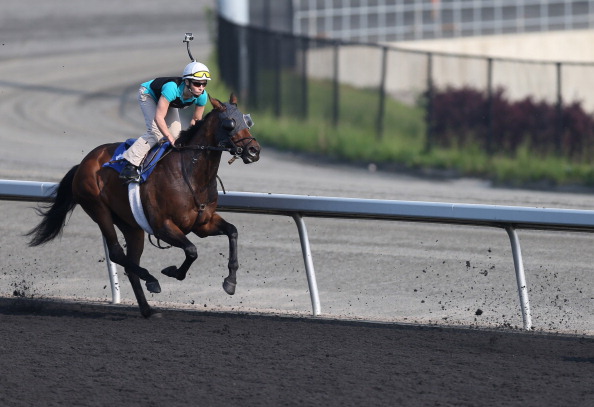 She rounds a bend, a tiny figure in a green jacket perched atop a thundering horse. Standing in her stirrups, she leans into the cold dawn. The only sounds are thudding hooves, panting horses and the low roar of jets from nearby Pearson airport.

Alone in the grandstand, Mike Luider watches the horses and riders rush past on their training runs.

“That’s Emma,” he says proudly of the jockey in green. “She’s the alpha female of the track.”

Located at Toronto’s northwestern edge, Woodbine Racetrack is the epicentre of Canadian horse racing. This is a high-stakes and insular world of intense rivalries and friendships; a world built on lost bets that exist at a bizarre crossroads of barn smells and smokestacks; a world populated with millionaire horse owners, stable sweeps and small, gaudily dressed men. It’s also a world where Emma-Jayne Wilson has found her perfect home.

“As a kid, I’d come to the races here at Woodbine,” Wilson says. “For as long as I can remember since then, I’ve always wanted to be a jock.”

Wilson might not be a household name outside of horse racing circles, but the 33-year-old jockey is one of Canada’s most successful female athletes. Since her professional debut in late 2004, the Brampton native has personally earned more than $4.5 million (U.S.) in nearly 9,000 races, finishing first more than 1,200. She has no sponsors, she’s competed extensively overseas and she’s succeeding in one of very few sports where men and women compete head to head.

“There’s nothing like it — nothing that you can compare it to,” Wilson says of horse racing. “It’s visceral, it’s primal, it’s simple and it’s perfection.”

Despite her small frame, everything about Wilson speaks strength: her squared shoulders, sharp jaw line, ice blue eyes and light brown hair tied tightly back. She’s constantly in motion and speaks in pointed flurries that exude the easy confidence of a woman who is on top of her game.

Competitiveness, she says, has always been part of her being. She never doubted she’d make it. But getting started in the male-dominated world of professional horse racing wasn’t easy.

Luider, Wilson’s agent, has been with her since day one. He’s a towering bear of a man with a mop of blond-grey hair, a deep, infectious laugh and a travelling salesman’s charm. Forty-four years ago, he bought his first racehorse at the age of 13. Working as an owner, trainer or agent, he’s devoted his entire life to the sport.

When Luider was first introduced to Wilson, she was working behind the scenes for one of the track’s trainers.

“I had my gender prejudices at first, but what really sold me on Emma was her walk,” Luider says. “She had this strutting confidence, like a junior John Wayne.”

Racing on 1,200-pound animals at 45 m.p.h. requires that kind of confidence, Luider says. And a good jockey also needs to be strong.

“If you could imagine you’re riding a motorcycle and the steering doesn’t work great all the time . . . the throttle sticks and the brake doesn’t work so well: that’ll give you a bit of an idea what it’s like to ride a racehorse.”

Luider decided to take Wilson on.

“But when I first started introducing her to trainers, everybody kept saying the same thing: ‘This skinny little girl? She ain’t got a chance of making it.’ So we came up with what we called the ‘handshake strategy.’ Emma trained with her hands, and I told her, ‘When you walk up to a trainer, I want you to shake their hand so hard that you break a bone.’”

Luider laughs at the memory.

“She started doing this death-grip thing and now everyone’s saying, ‘Holy s— is she strong!’”

“It worked,” he adds, “and the feedback had the positive effect of having her believe that she had this great strength, too.”

Luider managed to line up a handful of mounts for Wilson in late 2004. She won two of her first three races. There was no looking back.

As an apprentice jockey, Wilson won coveted Sovereign Awards, Canadian thoroughbred racing’s top industry honours, in 2005 and 2006. Then, in 2007, she became the first woman to win the prestigious million-dollar Queen’s Plate in the race’s then 147-year history.

“Even to this day, it gives me goose bumps,” Wilson says about the win. “I can’t even begin to describe the feeling.”

She might not have been the first woman to race at Woodbine — riders like her semi-retired jockey-cum-model rival Chantal Sutherland-Kruse helped pave the way — but Wilson has been the track’s most successful.

Of the 25 or so regular riders at Woodbine, seven are now women — a significant increase from a decade ago. Wilson is currently ranked 6th overall by earnings at the track. Her closest female competitor is ranked 10th, with less than half of Wilson’s 2014 earnings.

“There’s only one Emma, right?” Luider says. “Everybody wants to be an Emma.”

“It’s tough for most women because it’s a very physical sport,” says Jesse Campbell, a veteran male jockey. “But in my opinion, Emma is the best female rider I ever rode with.”

Wilson sees herself as a role model for younger female riders, but she’s never wanted to be pigeonholed as a novelty act.

“Don’t think of me as a female jockey in a male-dominated sport,” she says pointedly. “Just look at me as a jockey.”

Being a woman, however, might contribute to one of Wilson’s main competitive advantages. Many male jockeys, she says, have a much harder time keeping their weight below the necessary 120-pound mark. As a natural flyweight, Wilson packs about 108 pounds on her five-foot-two frame.

Before races, she says, it’s not uncommon to hear jockeys heaving up their lunches. The jockeys’ locker room is even equipped with a private basin-like “heaving bowl” for the purpose. They diet, purge, pop diuretics and languish in saunas while Wilson snacks contentedly — an odd inversion to an unfortunate societal norm.

“I wish I could say I understand and sympathize with some of the other jocks,” Wilson says, “but I really can’t.”

On race days, Wilson shows up at the track early to exercise horses. Luider lines up the mounts through trainers, who work for horse owners.

To win, Luider says, you have to ride the fastest horse in the race. To secure a spot on those animals, you need to be a top rider and you also have to have a good working relationship with the horse’s trainers.

“You ride better horses, you win more — it’s a perpetuating thing,” Luider says. “I get Emma on the horses. Her job is to win on them.”

During the height of Woodbine’s April-to-December season, races are held four times a week, with about 10 races being held per day. In an average week, Wilson can ride as many as 37 times. Some of the horses will be familiar to her, but many she will be mounting for the first time. While winning, she says, is 90 per cent horse, it’s also a balancing act between a horse’s ability, its training and a jockey’s skill.

“The ones that want to run and want to win and want to play the game are the horses that achieve beyond their natural ability and win races time after time after time,” Wilson says. “But sometimes you’ll have horses that are physically talented, but have no heart . . . What makes a top jock a top jock is being able to get on these different horses and pull out what tools they need to succeed.”

Wilson will study a horse’s past performances before each race and talk with its trainer about the animal’s strengths and weaknesses. Some, she says, need to be coaxed. Others need to be relaxed.

“I feel like one of the things that I bring to the table is the connection I can get with a horse.”

One of the first things she’ll do with an unfamiliar animal, she says, is blow on its nose.

“Something as simple as that, to me, is really important . . . If you ever watch two horses that have never met before, or even have met before, one of the first things they do is they walk up to each other face-to-face and blow on each other’s noses. That’s their way of shaking hands and saying ‘Hi, this is me.’”

There’s a hushed anxiety in Woodbine’s jocks’ room before each race. Inside, jockeys busy about, getting massaged and stretched or unwinding (and trying to shed pounds) in the sauna.

“This is the land of the little people,” Wilson laughs.

Many meticulously go over race stats to find their edge. There’s a puzzle room too (the jockeys seem to have a particular affinity for backgammon) and after getting prepped, they grab gaudy silk jerseys (every owner has their own designs) and gear before taking a breathalyzer for alcohol and weighing in.

At Woodbine, grandstand attendance is hitting record lows while revenues are reaching all-time highs. Gamblers are increasingly betting online and it’s not uncommon for the track to receive more than $2 million in wagers on a day where the stands sit relatively empty. A winning horse gets 60 per cent of a race’s purse, which start at $16,000. Ten per cent of that money goes to the jockey, who then gives cuts (totalling about two per cent) to their agents and the rest of their entourage.

There are no contracts in this industry: everything is done on a race-by-race basis. Have a bad couple of weeks and the trainers stop calling. No calls mean no rides — and no money. Things get even worse if you get injured.

One time, Wilson says she was out of commission for three months with a laceration to her liver after being run over by a horse. Still, in this fast-paced world of chronic uncertainty, Wilson has managed to stay firmly in the saddle. With her sights now on a win at the Kentucky Derby, she doesn’t plan on leaving the sport anytime soon.

“I love my job and I love this game,” Wilson says with a grin. “I don’t come to work every day; I get to come here and live my dream every day.”

This site uses Akismet to reduce spam. Learn how your comment data is processed.

Pilots are spotting UFOs and the Canadian military knows...
UFOs in Canada

Exploring the Canadian Rockies on an autumn road trip...
INTO THE MOUNTAINS

Covering politics, pop culture and (almost) everything in-between...
IN THE NEWSROOM

On the job with a professional crime scene cleaner...
THE GRIMMEST GIG